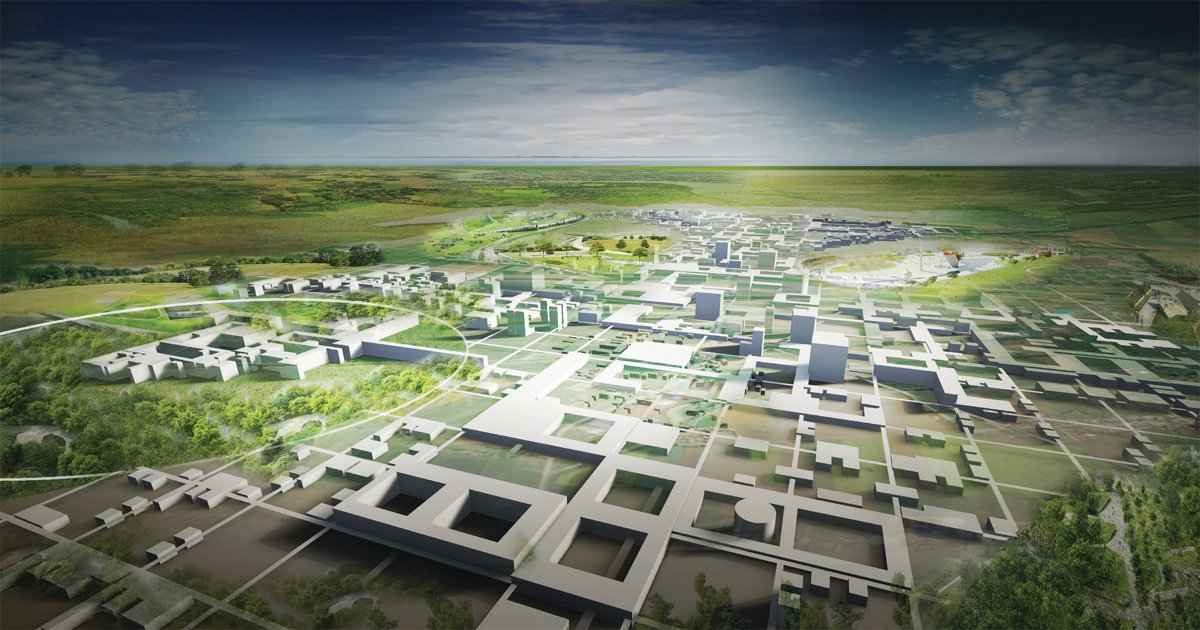 Context
Măgurele is a town situated in the south-western part of Bucharest, at about six kilometers. The city is known for its Institute of Physics, one of the best such institutes in Europe. The city and it’s link to the domain first became famous in 1956 with the creation of the Institute of Atomic Physics (IFA-Institutul de Fizică Atomică) and later in 1962 the first laser was placed here. After developing the nuclear energy part, it was included in the Central Institute of Physics. As time passed, the tradition expanded, the evolution of technology and the new materials evoked the interest of many researchers and as such the project of the ELI-NP is expected to bring significant advances in nuclear physics and other related domains.
The interest for the Romanian research centre continues nowadays, a very high intensity laser system and a brilliant gamma beam system as the city and research centre will see their implementation soon.

Current situation
The zone where the laser will be located has a pronounced vocation of urbanization as the south-western part of Bucharest is under-developed ( in contrast to the more established northern parts ). After analyzing the whole area surrounding the city of Bucharest, a couple of problems become visible. First, the transport infrastructure is incomplete, the rural character of the zone creates a discrepancy between the efficient institute and the rest of the city which has an air of rural suburbanity, the general state of the buildings is one of an advanced state of decay and there is also a lack of utilities. There are also other aspects that can cause problems of integration and social exclusions, such as the underdevelopement of education and a more integrated approach towards social inclusion.
Aside from these negative aspects there are several strengths: the connection between Măgurele and the capital city of Romania, having an airport near-by but most of all the tradition of the Institute are just some of the these. There are lots of opportunities, the city has a huge development potential and can be an attraction point for researchers and investors ( an emphasis on high-technoglogies and the research center, and also the connection between Bucharest and the Danube through the Bucharest-Danube Canal and the Port of 1 Decembrie on the Arges River. This task offers the opportunity to develop the concept on the entire area and increase in new domains unexploited until now ). This fact can also transform it into a threat because of the uncontrolled development and the environmental impact that can be catastrophic due to this.

Concept
Conversion-Integration-Connection
Wanting to keep the specific of the zone, the project has the existing buildings, principally the ones having a related function with the Physics Institute and most of the buildingsthat are found in a good condition are to be kept and converted. Beyond this, a new “layer” of constructions is proposed. The two “layers”, the existing one and the proposed one are expected to co-operate together, as the new city grid is suspended above, thus the city will develop vertically. The mixing of these layers continues into the mixing of functions, as public and private will be found on the levels of the city. As the city will emphasize the creative-arts, research and developement sectors, alongside using technology to improve a sustainable agriculture.
Another idea that is incremental to the project is the one of sustainability. The new-built town is based on the fundamentals of a sustainable architecture, as a a leading center of technology and
progress. We propose to combine the planned light rail with a series of strategies addressing the new challenges of the city, having looked into technologies and design principles that currently seem inevitable for future cities, but that have not been implemented on a larger scale yet.
The use of bicycles in Romania is increasing each year.As such we emphasize the use of bicycles as a fast, reliable and sustainable transport,improving health. We propose to upgrade the bicycle infrastructure with smart systems for traffic light control, close integration with the light rail . Between pahses 1 and 2 fossil-fueled vehicles will be phased out, and replaced with personal and public modes of transportation that are powered electrically.
Diverse small scale productions can reduce the dependency on polluting fertilizers and large scale farming. This will change mega farms into a new kind of bio-tech micro production integrated close to the urban fabric, thus allowing for new natural micro- habitats in closer relation to the city.
A vertical developed city facilitates the co-existing of related functions nearby a main one. The access to the upper constructions is assured by the new built grid. This grid also contributes to an efficient use of resources, as transportation will be suspended from it, leaving the upper part open for solar farms, recreation areas,or urban agriculture implementation.The city becomes a laboratory for sustainable technologies, and a showcase green-technologies that save energy and improve the quality of the urban environment.
The development is divided into three phases, as to avoid an uncontrolled development. Each of these three phases expects the development of the “existing layer” simultaneous with the new one.
In the first phase (2016-2025) a marginal ring delimits the entire zone, connecting it with the beltway of Bucharest, and the airport. This ring links the main axes of the project, so these main arteries will also be realized in this first phase. These intermodal nodes generate the nearest zones that will be built. The priority zone is the Institute and its related functions, as habitation, education centre, offices, shops, hospitals will be necessary . Another zone to be initiated in the first phase is the promenade zone, a long-lasting project that includes an extension of the canal, and the extension of the city to a waterfront.
The main intervention of the second phase (2025-2050) is to lay out the main green zones, as the main characteristic of the project is represented by the reintegrstion of green zones where they have been lost due to construction. There are three categories of green spaces: one for the research zone, one for agriculture and the third one for leisure. This zones are public and have the purpose to contribute to the social inclusion.
The third phase (2050-2075) presumes finishing the “layer above’’ as the city expands vertically, a link of personal and public cablecar transportation grids will service the city, and green zones will be found on the public levels of each cluster of buildings. Alongside the completion of the recreation areas the developing the industrial and waste management zone, an isolated zone that has a connection with Bucharest, for the transportation of materials and resources, will see completion 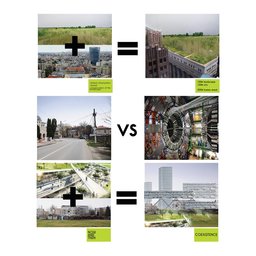 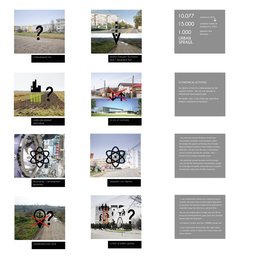 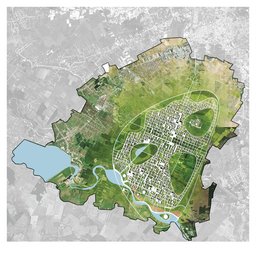 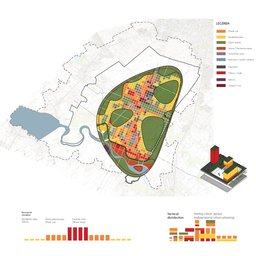 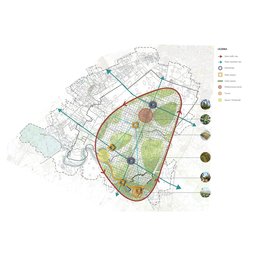 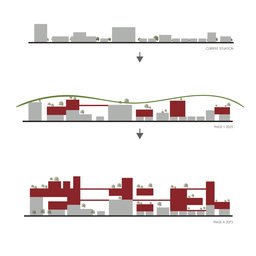 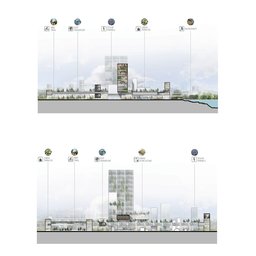 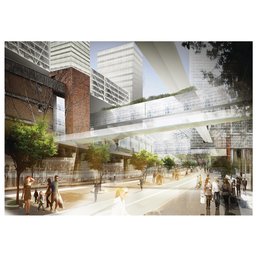 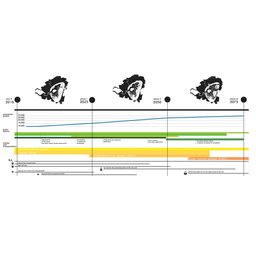 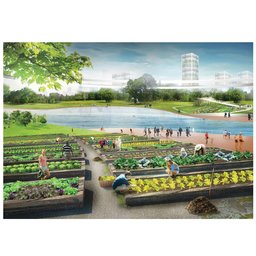 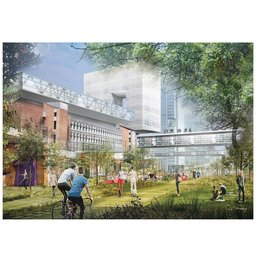 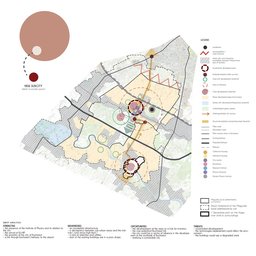 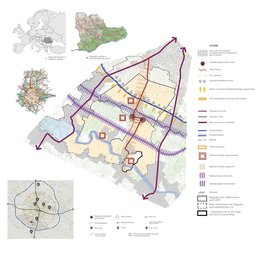 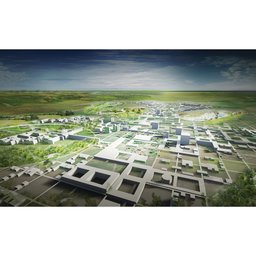 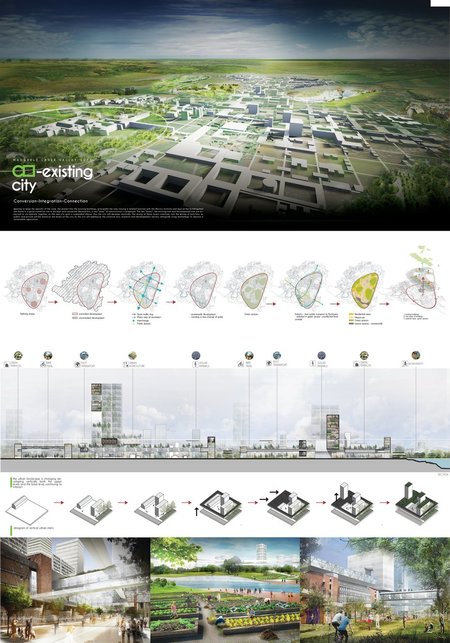 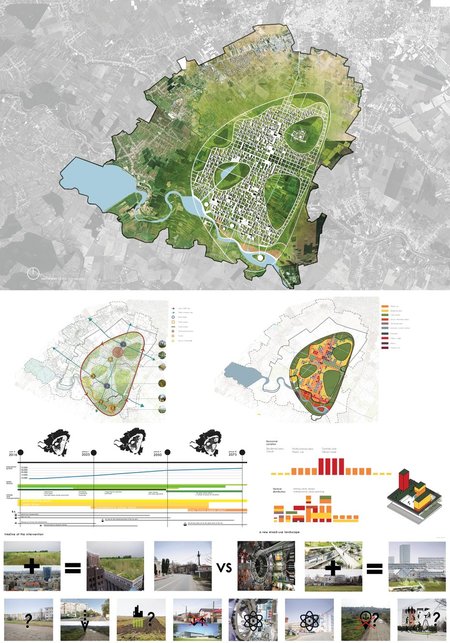